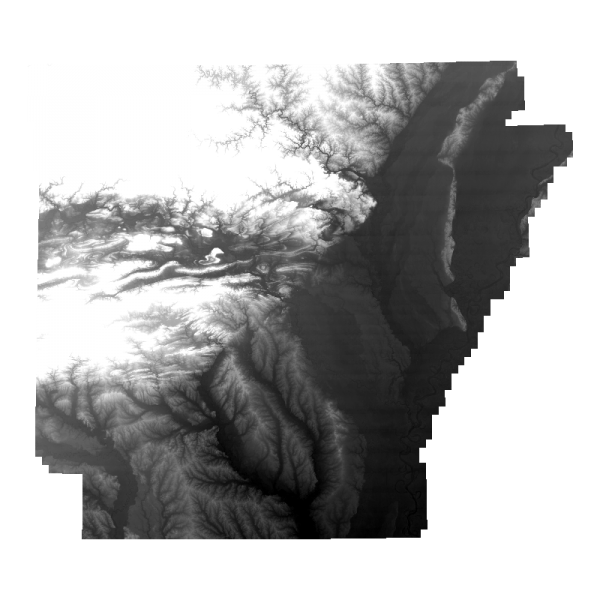 THIS DATASET IS NOT HYDROLOGICALLY ENFORCED AND IS NOT SUITABLE FOR SITE DESIGN, HYDROLOGIC DESIGN OR ANALYSIS

More information on the 5 Meter DEM accuracy can be found here: http://gis.arkansas.gov/Docs/ELEVATION_ONE_PAGER.pdf

Digital Elevation Model (DEM) is a representation of the topography of the Earth surface in digital format. The data is made up of sampled arrays of pixels depicting surface elevations in raster form. This data was captured as an ancillary product of a statewide ortho image acquisition using a Lecia ADS40 sensor. The primary DEM is a 5-meter ground resolution, quarter-quadrangle (3.75 minutes of latitude by 3.75 minutes of longitude) cast on the Universal Transverse Mercator projection (UTM) on the North American Datum of 1983 (NAD83). The geographic extent of the DEM is equivalent to a quarter-quadrangle plus the over edge ranges from a minimum of 50 meters to a maximum of 300 meters beyond the extremes of the primary and secondary corner points. The over edge is included to facilitate for the placement of the NAD83 and secondary datum corner ticks. This series of DEM’s was produced as a part of the 2006 Arkansas Digital Orthophotography Program administered by the Arkansas State Land Information Board and the Arkansas Geographic Information Office. The aerial imaging data used to create the DEM was acquired between January 15th and March 31st in 2006.