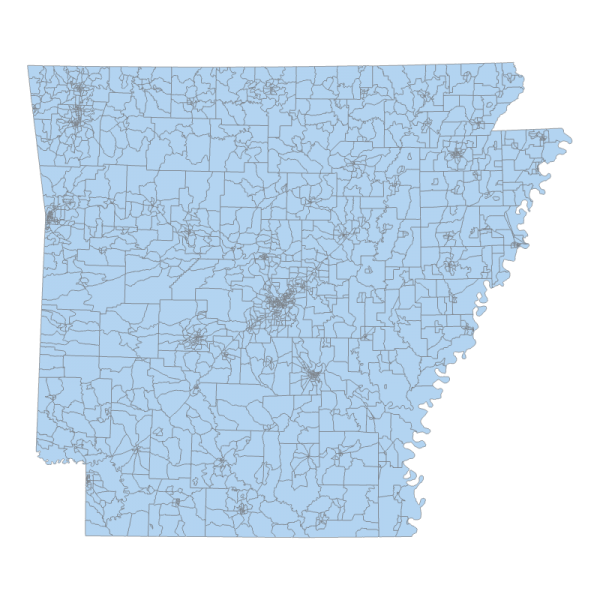 Publisher: U. S. Bureau of the Census Washington DC 20233 www.census.gov

Data available online through GeoStor at http://www.geostor.arkansas.gov. The subject file represents Census Block Groups 2000 for the State of Arkansas. It is a registered trademark of the Bureau of the Census and an extract of selected geographic and cartographic information from the Census TIGER database. The geographic coverage for a single TIGER/Line file is a cnty or statistical equivalent entity, based on January 1, 2000 legal boundaries. A complete set of files includes all counties and statistically equivalent entities in the United States and Puerto Rico. Files for the Island Areas are not included. The Census TIGER database represents a seamless national file with no overlaps or gaps between parts. However, each cnty -based TIGER/Line file is designed to stand alone as an independent data set or the files can be combined to cover the whole Nation. The files consist of line segments representing physical features and governmental and statistical boundaries. They do NOT contain the ZIP Code Tabulation Areas (ZCTAs) and the address ranges are of approximately the same vintage as those appearing in the 1999 TIGER/Line files. That is, the Census Bureau is producing these files in advance of the computer processing that will ensure that the address ranges in the TIGER/Line files agree with the final Master Address File (MAF) used for tabulating Census 2000. The files contain information distributed over a series of record types for the spatial objects of a cnty. There are 17 record types, including the basic data record, the shape coordinate points, and geographic codes that can be used with appropriate software to prepare maps. Other geographic information contained in the files includes attributes such as feature identifiers/census feature class codes (CFCC) used to differentiate feature types, address ranges and ZIP Codes codes for legal and statistical entities, latitude/longitude coordinates of linear and point features, landmark point features, area landmarks, key geographic features, and area boundaries.