Click Here To Subscribe To News And Data Updates!
View Cart “Circuit Court Districts” has been added to your cart. 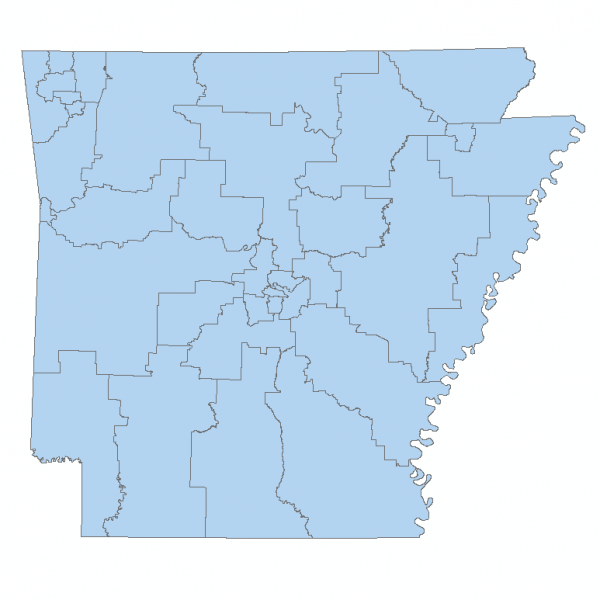 This layer represents the Arkansas State Senate district boundaries adopted by the Arkansas Board of Apportionment on November 29, 2021. The Board of Apportionment, members were Governor Asa Hutchinson, Secretary of State John Thurston and Attorney General Leslie Rutledge. The Board’s composition and purpose were created in 1936 by Amendment 23 to the Arkansas Constitution. The Board is responsible for redrawing 100 House and 35 Senate Districts so that each district meets various legal criteria, including each district being about the same size in population. This redistricting is required by law once every 10 years after the Federal Census. The District boundaries represent the legal boundary of each district. The boundaries were extracted from census block, voting district (VTD) or county boundaries in the 2020 Census files. A public record of the boundary plan is on file at the Elections Division of the Arkansas Secretary of State Office.

Please read below for additional information regarding recent corrections to this dataset. The official notice regarding these corrections can be found here

This data set reflects a revised version of the Final Adopted Plan correcting a line error between Senate District 29 and 35 in Washington County. This data set represents the Arkansas Board of Apportionment Senate Final Plan Adopted on November 29, 2021.

The GIS Office misinterpreted two sections of the Senate report adopted by the Board of Apportionment when preparing the Senate map. This created an error in the map between Senate District 29 and Senate District 35, in southwest Washington County. The excerpts below are from Final Senate Report Adopted on November 29, 2021. The adopted report serves as the legal description of the Senate Plan.

This documents the correction of the Senate line error.