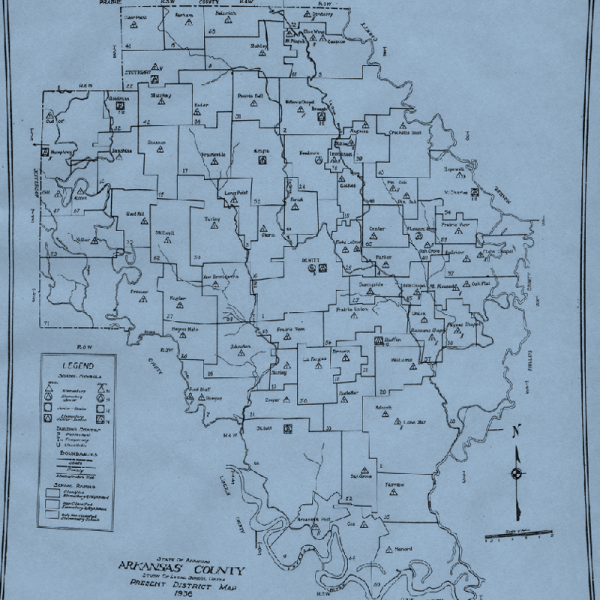 This series of 1936 county school district maps for Arkansas represents the state’s contribution to a 1935 United States Office of Education study of local school organization and administration.  The original project developed current school district maps and school consolidation plans for all 75 Arkansas counties and their 3,134 school administrative units based on data the 1935-36 school year, although maps for Desha, Greene, and Stone Counties were missing from the University of Central Arkansas collection from which the scanned map images were obtained.  The Arkansas data for the original study was reported in Arkansas State Department of Education, 1937.  Study of Local School Units in Arkansas.  Little Rock.  Work for the original study was conducted between March 1936 and June 30, 1937 through funding from the Works Progress Administration and the U. S. Department of the Interior.  This report states (p. 1) that the “general purposes of the Arkansas Study were (1) to collect, organize, and analyse data concerning present schools and school administrative units; (2) to formulate standards and plans for the reorganization of existing administrative units into more effective school units; and (3) to ascertain and plan for the needs of the future school program of Arkansas.”  The study’s official state project number was O. P. 5-116, while the U. S. Treasury assigned the project the following identifier: Project Authority No. 87, Work Project No. 50, Location Symbol No. 63-000-00, Type of Work Symbol, 1871, Appropriation Symbol, 005057.  For the original 1936-7 study, first two or more Works Progress Administration workers spent 6-10 months collecting data and “drawing maps of the present school districts showing roads, bus routes, school buildings, and the location of children of various age levels” (p. 3).  Then, this data was used to develop county-level school district reorganization plans.

Maps accompanying the 1937 Study of Local School Units in Arkansas report were scanned at 300 DPI and then georeferenced between May 1 – July 5, 2022.  Map scans were registered using distinctive tie points between the maps and contemporary GIS data consisting of US Public Land Survey Townships projected to UTM.  Among the series of 72 extant maps, the average number of control points was 61.7, with an average RMSE of 54.7 m.  This was sufficient to achieve a third order polynomial transformation.