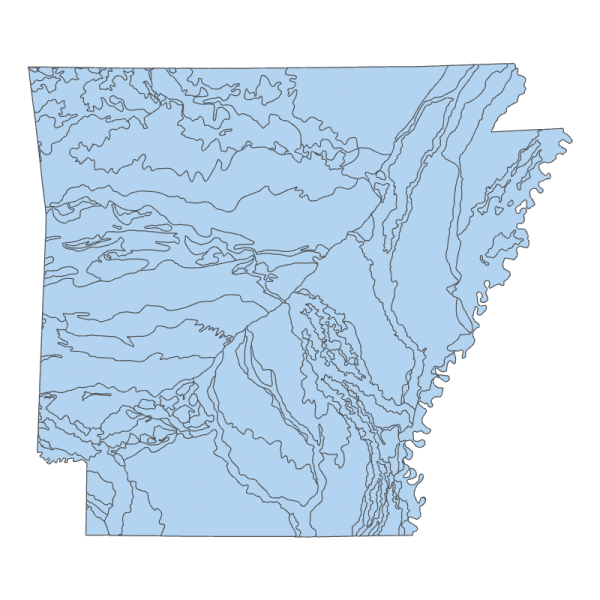 Ecoregions denote areas of general similarity in ecosystems and in the type, quality, and quantity of environmental resources. They are designed to serve as a spatial framework for the research, assessment, management, and monitoring of ecosystems and ecosystem components. By recognizing the spatial differences in the capacities and potentials of ecosystems, ecoregions stratify the environment by its probable response to disturbance (Bryce, Omernik, and Larsen, 1999). Ecoregions are general purpose regions that are critical for structuring and implementing ecosystem management strategies across federal agencies, state agencies, and nongovernment organizations that are responsible for different types of resources in the same geographical areas (Omernik and others, 2000). A Roman numeral hierarchical scheme has been adopted for different levels of ecological regions. Level I is the coarsest level, dividing North America into 15 ecological regions. Level II divides the continent into 52 regions (Commission for Environmental Cooperation Working Group, 1997). At level III, the continental United States contains 104 ecoregions and the conterminous United States has 84 ecoregions (U.S. Environmental Protection Agency [USEPA], 2003). Level IV ecoregions are further subdivisions of level III ecoregions. Methods used to define the USEPA’s ecoregions are explained in Omernik (1995), Omernik and others (2000), and Gallant and others (1989). The approach used to compile the ecoregions of Arkansas is based on the premise that ecological regions can be identified through the analysis of the spatial patterns and the composition of biotic and abiotic characteristics that affect or reflect differences in ecosystem quality and integrity (Wiken, 1986; Omernik, 1987, 1995). These characteristics include geology, physiography, climate, soils, land use, wildlife, fish, hydrology, and vegetation (including “potential natural vegetation” defined by Küchler (p. 2, 1964) as “vegetation that would exist today” if human influence ended and “the resulting plant succession” was “telescoped into a single moment”). The relative importance of each characteristic varies from one ecological region to another regardless of ecoregion hierarchical level. In Arkansas, there are 7 level III ecoregions and 32 level IV ecoregions; all but four of these level IV ecoregions are also found in ecologically similar parts of adjacent states (Chapman and others, 2002, 2004a, 2004b; Griffith, Omernik, and Azevedo, 1998). Arkansas’ ecological diversity is strongly related to regional physiography, geology, soil, climate, and land use. Elevated karst plateaus, folded mountains, agricultural valleys, forested uplands, and bottomland forests occur. Fire-maintained prairie was once extensive in several parts of the state. The ecoregion were compiled at a scale of 1:250,000, and depict revisions and subdivisions of earlier level III ecoregions that were originally compiled at a smaller scale (U.S. Environmental Protection Agency, 2003; Omernik, 1987). It is part of a collaborative project primarily between USEPA Region 6, USEPA-National Health and Environmental Effects Research Laboratory (Corvallis, Oregon), and the Multi-Agency Wetland Planning Team (MAWPT), which comprises representatives of six Arkansas state agencies (Arkansas Natural Heritage Commission, Arkansas Soil and Water Conservation Commission, Arkansas Game and Fish Commission, Arkansas Department of Environmental Quality, Arkansas Forestry Commission, and University of Arkansas Cooperative Extension Service). Collaboration and consultation also occurred with the U.S. Army Corps of Engineers (USACE), U.S. Department of Agriculture-Natural Resources Conservation Service (NRCS), U.S. Geological Survey (USGS), U.S. Fish and Wildlife Service, USGS-Earth Resources Observation Systems Data Center, and University of Arkansas-Center for Advanced Spatial Technologies. This project is associated with an interagency effort to develop a common framework of ecological regions (McMahon and others, 2001). Reaching that objective requires recognition of the differences in the conceptual approaches and mapping methodologies applied to develop the most common ecoregion-type frameworks, including those developed by the U.S. Department of Agriculture-Forest Service (Bailey and others, 1994), the USEPA (Omernik 1987, 1995), and the U.S. Department of Agriculture-Soil Conservation Service (1981). As each of these frameworks is further refined, their differences are becoming less discernible. Each collaborative ecoregion project, such as this one in Arkansas, is a step toward attaining consensus and consistency in ecoregion frameworks for the entire nation. Comments and questions regarding the Level III and IV Ecoregions of Arkansas should be addressed to Alan Woods, Oregon State University, c/o US EPA., 200 SW 35th Street, Corvallis, OR 97333, (541) 754-4469, email: woods.alan@epa.gov, or to James Omernik, USGS, c/o US EPA, 200 SW 35th Street, Corvallis, OR 97333, (541) 754-4458, email: omernik.james@epa.gov