In August the Arkansas GIS Office began sharing news  http://gis.arkansas.gov/2020/08/28/county-boundary-spatial-improvement-plan/  with GIS stakeholders regarding the need to improve the spatial quality of the County Boundary file. These changes are based on a policy adopted by the Arkansas GIS Board in early 2020. A key strategy of this plan is the release of a draft dataset to provide users an opportunity to test any applications that use County Boundaries prior to full production in January of 2021.

We have reached the point in the plan where the draft datasets are ready for publication. For this announcement several process notes are included to give GIS users more insight into the development.

We previously noted these edits are a function of the improved spatial accuracy of the Public Land Survey System (PLSS) Control Corners http://gis.arkansas.gov/2020/09/18/data-update-plss-corner-control-points/
data set. An example of the spatial accuracy improvement efforts as a result the PLSS Corner Control data collection can be seen below. The image shows the intersection of Prairie, Monroe and Arkansas counties. The survey instrument is positioned over a certified corner and is collecting precision level data. 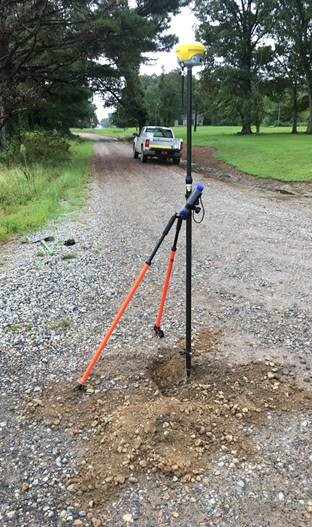 The tip of that instrument is sitting on the cap of the monument recording the intersection of Township 1 South, Range 3 and 4 West and Township 2 South Range 3 West and 4 West. The certified corner record for this location can be viewed here: http://geostor-corners.geostor.org/Prairie/5901S04W36001746.pdf 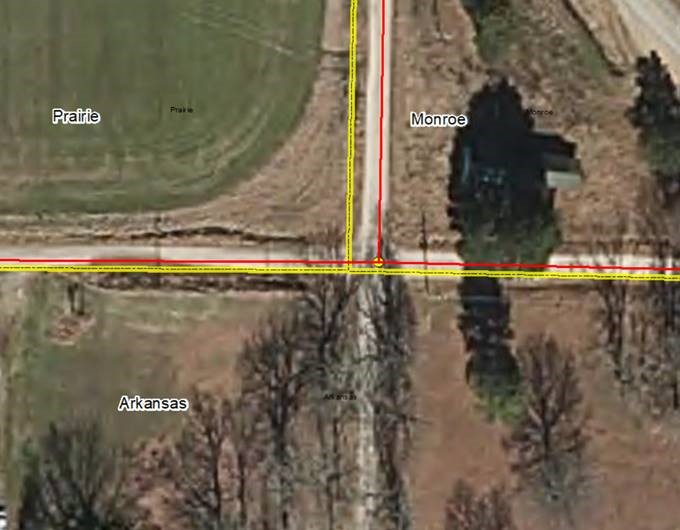 The image above demonstrates another County Boundary improvement example that affects several other GIS layers. The yellow line represents the current County Boundary data that is published via gis.arkansas.gov and used for a multitude of applications. The red line represents the corrected location based on the precision survey data collected by the Division of Land Surveys and others. At this location the County Boundary required a 19-foot adjustment. This location is an example of what we have started calling an interstellar corner. This specific point provides control for several administrative boundaries such as School Districts, Justice of Peace Districts, and Election Precincts, as well several others. With this example in mind here are a few more process notes.

In the preliminary analysis there were 1,218 changes to vertexes / change polygons. Studying these polygons, we identified 860 (71%) of them are smaller than 0.1 acres in size. These were a function of topology processing tolerances.

Further analysis focusing on polygons 0.1 to 0.5 acres in size (55 polygons) identified several areas County Boundary adjustment was warranted based on the improved PLSS Corner Control. However, there were still some topology processing polygons showing up in the river bends and a couple county lines.

The last group of polygons analyzed were 0.5 acres in size and larger (304 polygons). These essentially represent all PLSS and riparian level County Boundary improvements.

County Boundary polygons can be downloaded or accessed at: http://gis.arkansas.gov/product/county-boundary-polygons

County Boundary Change polygons can be downloaded or accessed at: http://gis.arkansas.gov/product/county-boundary-change-polygons/